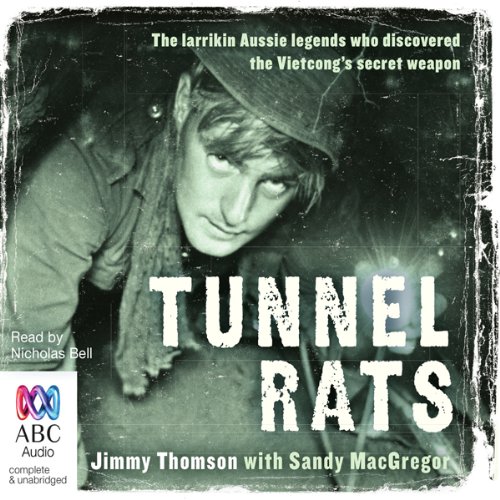 They were young, they were Australian, they were Army engineers and they were the first allied soldiers to risk their lives in the darkness of the Vietcong tunnels of South Vietnam. Staring death squarely in the face every day, not only did they follow their enemy down into these unknown underground labyrinths, but matched the Vietcong’s jungle warfare skills and defused thousands of their clever booby traps.

Off duty, it was a different story. The bad boys of 3 Field Troop were a boozing, brawling, bonking bunch of larrikins, who cut a swath through the bars and brothels of Saigon, fought American Military Police to a standstill, built a secret casino and booby-trapped their own HQ to teach their officers a lesson.

Thrilling, inspiring and action packed, this is the true story of the unsung heroes of Australia’s war in Vietnam. Living up to their motto of ‘We Make and We Break’, they created the legend of the Tunnel Rats.

4.3 out of 5 stars
4.3 out of 5
67 global ratings
How are ratings calculated?
To calculate the overall star rating and percentage breakdown by star, we don’t use a simple average. Instead, our system considers things like how recent a review is and if the reviewer bought the item on Amazon. It also analyses reviews to verify trustworthiness.

Adam Webb
3.0 out of 5 stars Average story about brave soldiers
Reviewed in Australia on 3 March 2018
Verified Purchase
I was really quite disappointed by this book. I was interested in the actual tunnel work these soldiers did. Instead half of the book was taken up by promulgating the image of the larrikin Aussie soldier who drinks and squires women. While these things may indeed be true, it takes far too much focus of the book.

The parts of the book that focussed on tunnel warfare and the role these tunnels played were very good. But it was far too brief. I feel this should have been the primary focus of the book.
Read more
Helpful
Report abuse

Amazon Customer
5.0 out of 5 stars Always something new to learn about.
Reviewed in Australia on 4 October 2021
Verified Purchase
I liked this book as it showed the bravery of both sides and what great soldiers they were. Plus it showed a side of an army not mentioned usually in any depth. It is well written and interesting. I am very proud to belong to the same nation as these brave men.
Read more
Helpful
Report abuse

ian hatton
5.0 out of 5 stars What a great book. I was a Nasho 69-71 stationed at ...
Reviewed in Australia on 25 October 2014
Verified Purchase
What a great book. I was a Nasho 69-71 stationed at SME (Hq Sdn). Many of the people in this book trained me or I had the privilege of working beside in Australia but did not realise at the time how much of a debt I owed them for what they did to make safe so many who served in Vietnam. The names came to life as I read the book. Gentlemen I salute you and thank you for all you did, I didn't realise just how 'special' you were at the time. A great read.
Read more
One person found this helpful
Helpful
Report abuse

Robert Mitchell
5.0 out of 5 stars Real Heroes
Reviewed in Australia on 31 December 2015
Verified Purchase
Enjoyed immensely looking forward to more of Sandy Mcgregor
From start to finish I had to keep going until the end
Read more
One person found this helpful
Helpful
Report abuse

Kindle Customer
5.0 out of 5 stars A Brave Bunch of Ratbags
Reviewed in Australia on 4 July 2017
Verified Purchase
A very easy read, the explanation of procedures is great and the subject matter intriguing. Tells it like it was, warts and all.
Read more
Helpful
Report abuse

Chalkymon
5.0 out of 5 stars Vietnam tunnel engineers tales
Reviewed in the United Kingdom on 11 August 2018
Verified Purchase
Fascinating insight into the development of the unique skills adapted during this most incredible period of military history. If you have any interest whatsoever in the Vietnam conflict then you'll be greatly impressed with this book. It's an 8, possible 9 out of 10 from me.
Read more
One person found this helpful
Report abuse

M bat
3.0 out of 5 stars Ok to read but Tunnels of Chui CHI is a better book.
Reviewed in the United Kingdom on 9 December 2017
Verified Purchase
It is possibly a bit unfair to rate this book straight off the back of reading Crouching Beast however whilst it is a decent read I do not think it explores the real story of what it was like to crawl through the Viet Cong tunnels and concentrates more on what went on above ground.
Read more
One person found this helpful
Report abuse

Roberta B
5.0 out of 5 stars Good Stuff, Bonzer Read!
Reviewed in the United Kingdom on 1 July 2014
Verified Purchase
I your thinking about buying this book buy it. Epic read! Couldn't put it down. Written with dry Aussie sense of humour in some places and also detailed in other respects. If you've read Tom Mangold's "The tunnels of Cu Chi" you will enjoy this read. Gripping and funny, a must have for the casual reader or as an addition to the home Vietnam American War Library, Only complaint is that the book ends. Oh well, have to wait for "A Sappers War" by Jimmy Thomson and Sandy MacGregor. (it's pre ordered) ;)
Read more
2 people found this helpful
Report abuse