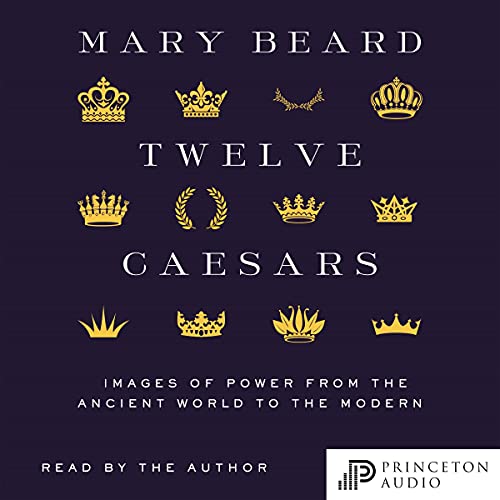 Twelve Caesars: Images of Power from the Ancient World to the Modern (Bollingen Series)

This audiobook narrated by best-selling author Mary Beard explores how images of Roman autocrats have influenced art, culture, and the representation of power.

What does the face of power look like? Who gets commemorated in art and why? And how do we react to statues of politicians we deplore? In this book - against a background of today’s “sculpture wars” - Mary Beard tells the story of how for more than two millennia portraits of the rich, powerful, and famous in the Western world have been shaped by the image of Roman emperors, especially the “Twelve Caesars”, from the ruthless Julius Caesar to the fly-torturing Domitian. Twelve Caesars asks why these murderous autocrats have loomed so large in art from antiquity and the Renaissance to today, when hapless leaders are still caricatured as Neros fiddling while Rome burns.

Beginning with the importance of imperial portraits in Roman politics, this book offers a tour through 2,000 years of art and cultural history, presenting a fresh look at works by artists from Memling and Mantegna to the 19th-century African American sculptor Edmonia Lewis, as well as by generations of now-forgotten weavers, cabinetmakers, silversmiths, printers, and ceramicists. Rather than a story of a simple repetition of stable, blandly conservative images of imperial men and women, Twelve Caesars is an unexpected tale of changing identities, clueless or deliberate misidentifications, fakes, and often ambivalent representations of authority.

From Beard’s reconstruction of Titian’s extraordinary lost Room of the Emperors to her reinterpretation of Henry VIII’s famous Caesarian tapestries, Twelve Caesars includes some fascinating detective work and offers a gripping story of some of the most challenging and disturbing portraits of power ever created.

Published in association with the National Gallery of Art, Washington, DC

Read more
©2021 Mary Beard (P)2021 Princeton University Press
Previous page
Next page
Learn more about membership
By completing your purchase, you agree to Audible’s Conditions Of Use and Privacy Notice.
Sold and delivered by Audible, an Amazon company
Share

4.7 out of 5 stars
4.7 out of 5
22 global ratings
How are ratings calculated?
To calculate the overall star rating and percentage breakdown by star, we don’t use a simple average. Instead, our system considers things like how recent a review is and if the reviewer bought the item on Amazon. It also analyses reviews to verify trustworthiness.

Peter Gallagher
3.0 out of 5 stars Hardback is poorly produced -- letting down the Author
Reviewed in Australia on 12 January 2022
I'm about ½ way through... reading slowly because, although I'm impressed by Beard's scholarship (meticulous, here) and interested in the topic of Rome's portrayal in later centuries, this books is 'thicker' than even it's substantial dimensions (300 pages without notes/bibilography) suggests. It's a minute examination of a specific topic (the 12 Emperors in later sculpture+painting) that is no-doubt always illuminating but the 'fine art' detail quickly overwhelms.

Still, my complaint here is about the production of the book. At first impression, it looks good with a high-contrast coated dust cover. But the images inside — crucial to the argument — are printed by the CMYK process on buff-colored matte paper: as a result they are dull (there's no better description) with anaemic blues and (although skin tones have been carefully preserved) often a warm color cast. The paper has a slight texture, too, so that the images have a low contrast that also affects both the hue and luminosity of the reproduction.

Still worse! The binding of the book ensures that images that are spread across parts of two pages loose a substantial slice of their width. For example: Vassily Smirov's "Death of Nero" on pp 232-3 shows three women loading the corpse of Nero onto a bier. But only two of the women are visible: the third is buried in the binding!

I'm sure the original of the text/presentation (lectures — a decade ago — at the Washington National Gallery in 2011) did not suffer these unfortunate deficits.

I'd suggest a T&H-style glossy-paper trade paperback would have been a MUCH better presentation of this image-rich volume.
Read more
Helpful
Report abuse
See all reviews

markr
5.0 out of 5 stars Beautiful book - how the Caesars have been depicted in the arts
Reviewed in the United Kingdom on 9 October 2021
Verified Purchase
Let me start by saying this book is not, except in passing, a history of Ancient Rome or of the 12 Caesars from Julius Caesar to Domitian covered by Suetonius. Instead it covers how the images of the emperors have been depicted through out history on coins and medals, on teacups, tapestries, and in paint and marble. The emperors have even been made of chocolate. Mary Beard shows how their identity has sometimes been mistaken and sometimes confused, with interesting anecdotes along the way. As such this much more art history than political history although there are elements of both. A good knowledge of the period would help to get the most enjoyment from the book.

I enjoyed reading the book. It is beautifully produced and there are numerous illustrations in colour - almost always near to the text which refers to them. Mary Beard's writing is always a joy, and this book is no exception. I did struggle with the sections on coins and medals. I am no numismatist, and I found these parts a little hard going. The rest though, from Titian's paintings to the tapestries commissioned for Henry VIII was fascinating, and I particularly enjoyed the consideration of how the wives of the emperors have been depicted through history.

The book is presented in roughly chronological order of the artworks, which helps understanding and reveals how the presentation in various art forms has changed over time.
Read more
8 people found this helpful
Report abuse

Stephen Black
5.0 out of 5 stars Just Superb !!!!!
Reviewed in the United Kingdom on 3 October 2021
Verified Purchase
I must admit that I always find Mary Beard fascinating and her books pitched at the correct level (not always achieved successfully by esteemed academics ) . This is no exception and is both written and illustrated beautifully. As to the quality all I can say is I received my copy Friday and am writing this review Saturday afternoon !!! Enough said !
Read more
8 people found this helpful
Report abuse

Stephen Bentley
5.0 out of 5 stars Easy to Follow.
Reviewed in the United Kingdom on 12 October 2021
Verified Purchase
Fascinating. Written so that I can hear the voice. Which is a good thing. I can't comment on historical accuracy, wouldn't presume. Have to say though that it all made sense to me and I found it all really easy to follow - though the assorted family trees are very helpful. The illustrations have been carefully placed, though I do find them rather murky - not sure why that was thought essential by the publisher. The argument is clearly put and I thought easy to follow.
Read more
2 people found this helpful
Report abuse

Gonch888
5.0 out of 5 stars Scholarly read
Reviewed in the United Kingdom on 19 December 2021
Verified Purchase
As with other books she has written Prof Mary Beard has produced another beautifully written account of notable men from Antiquity onwards.
Read more
One person found this helpful
Report abuse

RAY J
5.0 out of 5 stars A VERY CONCISE REVIEW OF THE ROMAN WORLD.
Reviewed in the United Kingdom on 21 November 2021
Verified Purchase
A VERY CONCISE AND READABLE HISTORY OF THE ROMAN WORLD AND ITS IMPERIAL LEADERS - BOTH GOOD AND BAD!
Read more
One person found this helpful
Report abuse
See all reviews
Back to top
Get to Know Us
Make Money with Us
Let Us Help You
And don't forget:
© 1996-2022, Amazon.com, Inc. or its affiliates