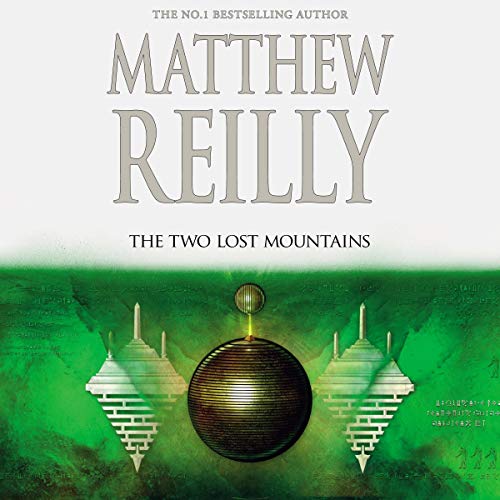 An incredible victory but at a terrible price....

Against all the odds, Jack West Jr found the Three Secret Cities but at a heartbreaking cost.

His beloved daughter, Lily, it appeared, was slaughtered by Sphinx in a cruel ancient ritual.

To the mountains and the fall!

With his rivals far ahead of him, Jack must now get to one of the five iron mountains - two of which have never been found - and perform a mysterious feat known only as 'The Fall'.

Although what is this object on the moon that is connected to it?

Amid all this, Jack will discover that a new player has entered the race, a general so feared by the four legendary kingdoms they had him locked away in their deepest dungeon.

Only now this general has escaped, and he has a horrifying plan of his own....

4.6 out of 5 stars
4.6 out of 5
2,806 global ratings
How are ratings calculated?
To calculate the overall star rating and percentage breakdown by star, we don’t use a simple average. Instead, our system considers things like how recent a review is and if the reviewer bought the item on Amazon. It also analyses reviews to verify trustworthiness.

Ian Crane
3.0 out of 5 stars Almost as unnecessary as Indiana Jones 4
Reviewed in Australia on 21 October 2020
Verified Purchase
I'm not going to blow smoke, but after 13 years of this anthology and more than half my life reading your books, this one was repetitive (5 times) the deaths didn't feel earnt, and it was generally bloated repeating itself and the explaining previous plot points, or pausing mid sentence to to restate already established facts. If you cut all that out and the choppy editing the book would have been even shorter. This was filler plain and simple when they simply could have "got to the maze" from the start. Most of the cast was sidelined asleep or left unresolved. Not the best book.
I don't know what else to say, except that I simply may have outgrown this author. Having picked him up in my early teens, I have read and continue to read all his books.
However assetions that the '3 wise men' were just a myth and that Jesus was 'just a man' are ill informed and ignorant of real historical fact. The books are pure whimsy but borderline offensive by propogating an incorrect message to young readers.
I applaude the fact this series is still going but I lament that's it's getting harder and harder to read the next one, not just as I get older but that the writing, well it's either getting worse or my standards are getting higher.
It's sad that I've almost 'grown out' of these stories but 7 books was maybe asking too much for an anthology series with no self contained stories.
The latest book spends half the time recapping itself, reminding the reader of previous things and self indulging in Reilly's trademark, " let me saying something to you, then also tell you why it's so cool and why you should like it" style.
Talking AT the audiance is not cool. Cursory referances to everything under the son, doesn't actually show any research or intellect only that the author skimmed the bare essentials on what popular referances were required and then we add the "what most people don't know wink nudge it's a secret" belittles the reader and is patronising.
I really try but the universe is now so bloated half the cast is either killed off or put to sleep and side lined in this one just to focus the plot somewhat 🤔 Some of the statements in this book are either sheer flights of fancy or ignorance and whimsy. It's real hard to know what Reilly actually believes and thinks is true, unless he doesn't know, which is really frustrating.
Read more
4 people found this helpful
Helpful
Report abuse

Rick Klima
5.0 out of 5 stars Reilly does it again
Reviewed in Australia on 29 October 2020
Verified Purchase
Once more I put off reading this until I felt ready. That entailed re-reading the 4 Legendary Kingdoms and the 3 Secret Cities to reacquaint myself with this remarkable characters exploits. Sadly, I picked up this novel and only stopped when I had finished it, not tasking the time to enjoy it fully. I suppose that simply means I shall read it thoroughly at a future time. Jack brings out a loyalty in people that they do not relate they possess., and Matthew allows the reader to escape into this world, and for a short time, travel the globe and fight alongside Jack and his team of unsung heroes. To say I enjoyed this book would be an understatement, and while I have no desire to wish my life away, I look forward, eagerly, to the next and final instalment in the life of Jack and his friends. While I know not where the saga shall end, I can only hope that Jack and Zoe, along with the rest of their family, who do so much for no recognition, fame, or riches, get to spend the rest of their time together in peace.
Read more
Helpful
Report abuse

Jodie
5.0 out of 5 stars In anticipation
Reviewed in Australia on 17 October 2020
Verified Purchase
I have been looking forward to this book for years now and while usually I devour the book in a day or two this time I tried to hold off and drag it out. Yet again I failed as three days after it’s release I’m sitting here yet again sad that it’s all over. Matthew your books are impossible to put down and ending on a cliff hanger like that which I’ll admit I expected it to end there at the beginning I’m sad to have to wait to find out what happens next. Knowing the next will be the last I’m not sure how I feel about that. Thanks for another fabulous adventure.
Read more
3 people found this helpful
Helpful
Report abuse

How Mathew Reilly can even conceive half of what he does is just beyond belief. I always look forward to the next book with anticipation and sadness, because surely he must have a less than exceptional book somewhere after all the massive hits he has had !!!!!!!!!!

Absolutely well worth the read, and I hope there are Matthew Reilly publications yearly for the next 50 years !!!!
Read more
Helpful
Report abuse

Bluey Schulte
5.0 out of 5 stars Matthew Reilly's latest
Reviewed in Australia on 17 November 2020
Verified Purchase
What can I say about this book, except WOW, I read somewhere that an author's greatest comment from a fan or reader is "That was great, when is the next one", well with Matthew Reilly's Jack West Jr "The 2 Lost Mountains" was just like that, excellent. The only trouble is supposedly that the next one is the last of Jack West, which is a bloody shame, but as long as Matthew keeps writing like this, I'll keep buying his stories. Go Matt, go Jack
Read more
Helpful
Report abuse

Donna
5.0 out of 5 stars Great read as always.
Reviewed in Australia on 21 October 2020
Verified Purchase
Makes me want to go back to the start of the books and read them all over again. Really ends on a cliffhanger which is sad because we know it’s the last one for this series. Hopefully the wait for the next book is short.
Read more
One person found this helpful
Helpful
Report abuse

jenny
5.0 out of 5 stars Fantastic
Reviewed in Australia on 25 October 2020
Verified Purchase
As always with Matthew Reilly, this book is u putdownable! He always leaves me breathless with the speed of the story and events. Everything in his stories is epic!
I heartily recommend this book for anyone who loves adventure.
In Matthew's words, I found it to be immensely satisfying. Can't wait for the next and last in the series.
Read more
Helpful
Report abuse

LOBO SOLITARIO
4.0 out of 5 stars He's back...
Reviewed in Australia on 9 November 2020
Verified Purchase
Good to see Matthew Reilly (MR) back, writing in his original style! Good to see the characters that made MR a successful writer, back also! Easy to read...interesting story...enough twists to keep the reader guessing and wanting to know where the events are going. His characters are interesting...some are 'creepy' but necessary! I'm hoping for, Call Sign, Scarecrow to be resurrected...come on, Matthew...what do you reckon...???
Do I recommend this book...I certainally do!!!
Read more
Helpful
Report abuse
See all reviews

Spence
5.0 out of 5 stars Ooh you rotter
Reviewed in the United Kingdom on 22 January 2021
Verified Purchase
Loved this, not saying much about it, I don't want to spoil the story for others.
You'll know why I wrote that when you've read it anyway.

Christopher Young
5.0 out of 5 stars How are these not films?
Reviewed in the United Kingdom on 26 January 2021
Verified Purchase
Because of the Jack West Jr books, I consider Matthew Reilly to be one of my all time favourite authors. This story is fantastic, and as much as it's becoming more fantastical that the previous books, it was still a page turned and I found myself reading into the very small hours.

If you like adventure books with many cliffhangers, this series of books is for you.

rsains
5.0 out of 5 stars Perfect scene setting for the last book
Reviewed in the United Kingdom on 29 January 2021
Verified Purchase
Brilliant read, although felt much more scene setting for the last book, a bit like the six sacred stone was in setting up for the royal houses explosion in the fifth greatest warrior. I have always marvelled at the way Matthew Reilly weaves mythology into the storyline with very strong explanations of how they fit in the Jack West World. Plenty of “oh so that’s how that links with this part of the story” moments and fantastic how the clues fleetingly mentioned in earlier books come to life.
Really looking forward to being able to read the last book, and I enjoy the books that much I fully expect to read the first six again to make sure not a single detail is lost in book seven!
Read more
6 people found this helpful
Report abuse

Grahame West
3.0 out of 5 stars Felt like a filler
Reviewed in the United Kingdom on 8 February 2021
Verified Purchase
Seven Ancient Wonders was the first Matthew Reilly I read & really like his work, have read all his books. The first three Jack West books were brilliant & the ending I felt was spot on. But the last two in the Jack West series I felt have been lacking slightly. Just felt like more of the same, even the demise of two main characters in this book felt like a throw away. Suggest the story should have been taken in a different direction, e.g. with Lily as the main character & not Jack. Just hope Mr Reilly saves the day in book 7 and concludes Jack & his crews tale with a book as good as the first one.
Read more
2 people found this helpful
Report abuse

J. A. Gibson
5.0 out of 5 stars Thrill ride ahead
Reviewed in the United Kingdom on 27 January 2021
Verified Purchase
Don't say you haven't been warned. Jacks back and its frantic action all the way. Having waited what felt like forever for the UK release I'm so pleased I did. I fully intend to read all Jack's adventures back to back going into the finale. I just hope it comes soon.
Read more
3 people found this helpful
Report abuse
See all reviews
Back to top
Get to Know Us
Make Money with Us
Let Us Help You
And don't forget:
© 1996-2022, Amazon.com, Inc. or its affiliates