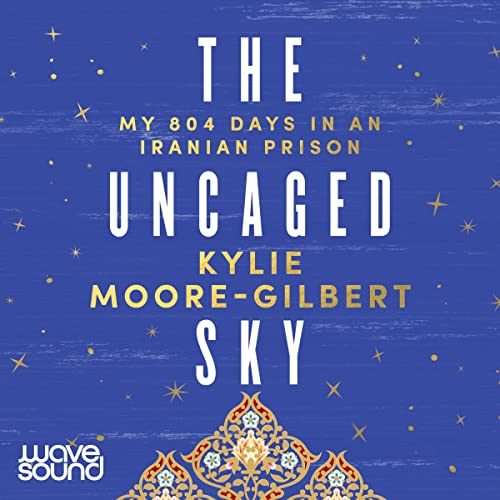 The Uncaged Sky: My 804 Days in an Iranian Prison

On 12th September 2018, British Australian academic Kylie Moore-Gilbert was arrested at Tehran Airport by Iran’s feared Islamic Revolutionary Guards. Convicted of espionage in a shadowy trial presided over by Iran’s most notorious judge, Dr Moore-Gilbert was sentenced to 10 years in prison.

Incarcerated in Tehran’s Evin and Qarchak prisons for 804 days, this is the full and gripping account of her harrowing ordeal. Held in a filthy solitary confinement cell for months, and subjected to relentless interrogation, Kylie was pushed to the limits of her endurance by extreme physical and psychological deprivation.

Kylie’s only lifeline was the covert friendships she made with other prisoners inside the Revolutionary Guards’ maximum-security compound where she had been ‘disappeared’, communicating in great danger through the air vents between cells and by hiding secret letters in hava khori, the narrow outdoor balcony where she was led, blindfolded, for a solitary hour each day.

Cut off from the outside world, Kylie realised she alone had the power to change the dynamics of her incarceration. To survive, she began to fight back, adopting a strategy of resistance with her captors. Multiple hunger strikes, letters smuggled to the media, co-ordinated protests with other prisoners and a daring escape attempt led to her transfer to the isolated desert prison Qarchak to live among convicted criminals.

On 25th November 2020, after more than two years of struggle, Kylie was finally released in a high-stakes three-nation prisoner-swap deal orchestrated by the Australian government, laying bare the complex game of global politics in which she had become a valuable pawn.

Written with extraordinary insight and vivid immediacy, The Uncaged Sky is Kylie Moore-Gilbert’s remarkable story of courage and resilience, and a powerful meditation on hope, solidarity and what it means to be free.

4.5 out of 5 stars
4.5 out of 5
294 global ratings
How are ratings calculated?
To calculate the overall star rating and percentage breakdown by star, we don’t use a simple average. Instead, our system considers things like how recent a review is and if the reviewer bought the item on Amazon. It also analyses reviews to verify trustworthiness.

christine
5.0 out of 5 stars gripping reading
Reviewed in Australia on 31 March 2022
Verified Purchase
A beautifully written and honest revelation of what the author experienced in her long stay in various Iranian prisons, after being jailed on trumped up ludicrous charges. I could not put it down. At once a memoir of a ghastly experience, it is also a story of how to survive in awful circumstances, and a testimony to the power of female friendship.
Read more
Helpful
Report abuse

Suze
5.0 out of 5 stars Unputdownable
Reviewed in Australia on 3 April 2022
Verified Purchase
This book is an absolutely engrossing account of Dr Kylie Moore-Gilbert’s experiences during her unjust imprisonment in Iran. Detailed and extremely well written, the reader instantly connects with Dr Moore-Gilbert as she paints a vivid picture of her confusion, fear and loneliness, of the mental torture she endures and the importance of the friendships and human bonds she forges. Her resilience, fierce intelligence, empathy and courage shine through as she recounts her story. I simply couldn’t put this book down.
Read more
Helpful
Report abuse

catlang
5.0 out of 5 stars resilience in a corrupt regime
Reviewed in Australia on 5 April 2022
Verified Purchase
I am amazed how the author managed to stay sane through this horrendous regime. A gripping read. I have nothing but admiration for her.
Read more
Helpful
Report abuse

Courtney
5.0 out of 5 stars Totally enthralling
Reviewed in Australia on 1 April 2022
I could not put this book down once I started. The story is so eloquently written, with mind blown detail put into Kylie’s experience that makes you feel connected to her throughout. A beautiful retell of a horrific experience. Kylie’s story is a must read.
Read more
Helpful
Report abuse
See all reviews

Amazon Customer
4.0 out of 5 stars compelling reading
Reviewed in the United Kingdom on 19 April 2022
Verified Purchase
With the recent release of Nazanin Zaghari- Ratcliffe I wanted to learn more about what she might have endured. I found this book deeply affecting. It will stay with me for a long time. Kylie is a woman of immense resilience and I salute her for it. I am glad I have read this book.
Read more
One person found this helpful
Report abuse

Lesley Wood
5.0 out of 5 stars How did she survive
Reviewed in the United Kingdom on 3 May 2022
Verified Purchase
An incredible read of suffering & endurance, bravery & hope. A page turner as you long like Kylie to know she is released. So many times she survived being told she would go home only for her hopes to be dashed. How does anyone survive solitary confinement, let alone a brilliant mind like Kylie.

Her story should be read by everyone.
Read more
Report abuse

GraceK
5.0 out of 5 stars Utterly gripping, beautifully written
Reviewed in the United Kingdom on 17 April 2022
Verified Purchase
I’m a totally sleep deprived mother of a small baby yet couldn’t bring myself to put this down when the choice was between sleeping or reading this. Kylie writes so beautifully and her grace, strength and courage really shine through this incredible account of what she went through. A highly recommended read.
Read more
Report abuse

Juran
5.0 out of 5 stars An interested read, told from the heart
Reviewed in the United Kingdom on 4 June 2022
Verified Purchase
Kylie is a strong woman, she tells her story so well.
Read more
Report abuse

Kate
5.0 out of 5 stars Loved it
Reviewed in the United Kingdom on 5 May 2022
Verified Purchase
I’d highly recommend this, absolutely loved it. The first time I’ve completed a book so quickly in ages!
Read more
Report abuse
See all reviews