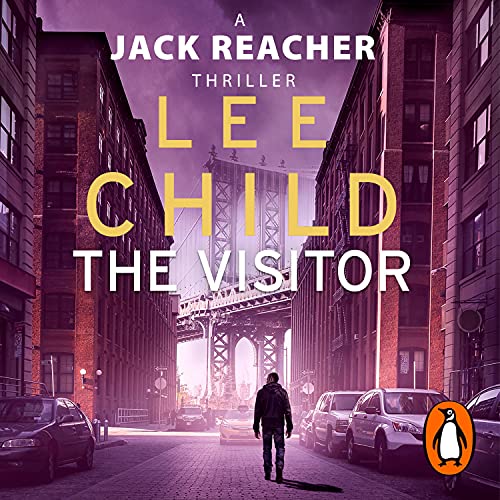 Random House presents the audiobook edition of The Visitor by Lee Child, read by Jeff Harding.

Sergeant Amy Callan and Lieutenant Caroline Cooke have a lot in common.

Both were army highflyers. Both were acquainted with Jack Reacher. Both were forced to resign from the service.

Now they're both dead.

Found in their own homes, naked, in a bath full of paint.

Apparent victims of an army man. A loner, a smart guy with a score to settle, a ruthless vigilante.

Switch between reading the Kindle book & listening to the Audible narration with Whispersync for Voice.
Get the Audible audiobook for the reduced price of $42.54 after you buy the Kindle book.
Learn more about membership
By completing your purchase, you agree to Audible’s Conditions Of Use and Privacy Notice.
Sold and delivered by Audible, an Amazon company

4.5 out of 5 stars
4.5 out of 5
16,020 global ratings
How are ratings calculated?
To calculate the overall star rating and percentage breakdown by star, we don’t use a simple average. Instead, our system considers things like how recent a review is and if the reviewer bought the item on Amazon. It also analyses reviews to verify trustworthiness.

Amazon Customer
3.0 out of 5 stars Good entertaining read - excellent audio
Reviewed in Australia on 19 March 2019
Verified Purchase
The story was entertaining enough but not he best Reacher so far. The audio was very good and helped me get through it. Some of the "drifter" parts of the story seemed to try to hard and it felt as if Child had created a millstone for his back by introducing a more significant love interest.

Also, the "motive" angle. It reminded me of these works (not verbatim as I was in my teens when I read it)

Ruffy D
4.0 out of 5 stars Not as good as the first books I have read but still gives enough to not put it down.
Reviewed in Australia on 26 August 2020
Verified Purchase
I just loved the Jodie connection and their past. This book had some continuity with the previous book in regards to this relationship. Time for Reacher to move on now. I'm glad that he lives to allow Lee to write the next book. I guess that if Reacher died then would that mean Lee has no more books to write? Knowing that there are 24 books (or thereabouts) you just know that Reacher will come out alive and kicking.
Read more
Helpful
Report abuse

Sallyf
5.0 out of 5 stars Another Kack Reacher novel
Reviewed in Australia on 22 May 2019
Verified Purchase
Every time a new Jack Reacher novel comes I buy it, he’s a great character and gets into interesting predicaments
Read more
Helpful
Report abuse

Sentimental Bloke
5.0 out of 5 stars Lee Child delivers again
Reviewed in Australia on 3 September 2020
Verified Purchase
Jack (none) Reacher crunches through the bad guys, outthinking and outsmarting them while winning the heart of another fine woman. What a man. What a story.
Read more
Helpful
Report abuse

Lee Davis
3.0 out of 5 stars Not as good as the previous books
Reviewed in Australia on 21 September 2019
Verified Purchase
Alas, this wasn't as good as books 1-3, but won't deter me from reading book 5
Read more
Helpful
Report abuse

chassyh
5.0 out of 5 stars i enjoyed this read twice!!
Reviewed in Australia on 16 November 2014
Verified Purchase
I have been reading through the JR series and thought this had an outststanding plot and was well written in relation to some of the other JR novels. We have recently gone to ipad world and kindle and the technology is great, especially with a nice light (cant put it down) read.
Read more
Helpful
Report abuse

Amazon Customer
3.0 out of 5 stars Predictable
Reviewed in Australia on 19 April 2017
Verified Purchase
Sorry Lee Child.... not your best book. However given it is your fourth, you get better with time......
certainly THANK GOODNESS!!
Read more
Helpful
Report abuse
See all reviews

Luke
5.0 out of 5 stars Probably my favourite Reacher book yet
Reviewed in the United Kingdom on 11 March 2020
Verified Purchase
So this was the first Reacher book where it felt far more detective than action-hero. There was a lot less fist fights and car chases and such and more deliberating, discussing and using wits.

I enjoyed the slight change and it was a nice change.

Lee Child's writing continues to bug me a bit, describing places far too much with far too much description. Characters having conversations that lead the plot nowhere and feel like filler.

But this can all be forgiven as this was the most interesting Reacher book yet that has me guessing until the end. Whenever there's intrigue and suspicion to be had, you're always guessing in your head who the villain might be but it wasn't too obvious at any point for me.
Read more
12 people found this helpful
Report abuse

Jerry Atrick
5.0 out of 5 stars Jack Reacher meets his match
Reviewed in the United Kingdom on 12 August 2021
Verified Purchase
I thought I had read all the Jack Reacher books, but this one I missed first time around. As usual it starts with a standard Reacher situation, but this time Jack has bitten off more than he can chew.
He is constantly outmaneuvered by the protagonist and the reader is constantly given (in italics) the thought process of the perp but as usual, Childs twists and turns the plot and is always two jumps ahead.
I would not dare to suggest this is the top Reacher novel but it's in there, swinging.
Read more
3 people found this helpful
Report abuse

InachisYarns
5.0 out of 5 stars aka The Visitor
Reviewed in the United Kingdom on 28 September 2016
Verified Purchase
I love this book. Wish it had been clear that it was also known as The Visitor as I already had a copy!
Read more
37 people found this helpful
Report abuse

Mr. JM DAVIES
1.0 out of 5 stars The visitor
Reviewed in the United Kingdom on 13 October 2018
Verified Purchase
Any reader of this type of book could have easily worked out who was the culprit, the motive and the method, within the first chapters. All that was left was to read through the remainder of the book hoping for some action and suspense which unfortunately was sorely lacking.

This is a poor offering from a normally excellent series with Jack Reacher. If written earlier in the Author's writings it would possibly explain its lack-lustre.

However, I believe, it does little for Child's reputation.
Read more
8 people found this helpful
Report abuse

Rob Young
5.0 out of 5 stars Jack Reacher is at it again
Reviewed in the United Kingdom on 12 December 2018
Verified Purchase
After reading the first 3 books and loving them i had to carry on (still a long way to go). This sets a slightly different tone to the previous books and is more of a mystery that you don't know which way its going to go than the previous more action based thrillers. It keeps you guessing until the end is very well written, unpredictable and entertaining!
Read more
8 people found this helpful
Report abuse
See all reviews