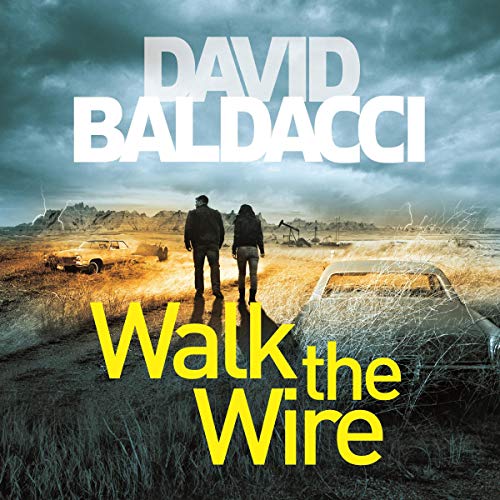 Remember his name: FBI Agent Amos Decker is back in a thrilling memory man investigation from number one bestseller, David Baldacci.

A town with a secret.

A lone hunter discovers the remains of a woman in North Dakota’s Badlands. She appears to have had a post-mortem performed on her reminiscent of those only seen on TV shows – but this time, there was no slab, morgue or camera in sight.

A victim without a past.

The reason why Irene Cramer’s death merits an FBI investigation becomes rapidly clear when key questions surface about her mysterious past. Little is known about this school teacher, where she came from or her true identity. She clearly had something to hide.

A hero with a unique skill.

FBI investigator, Amos Decker and his colleague, Alex Jamison, are summoned to seek answers in the local community of London, North Dakota, which sits at the very heart of the fracking industry. Enriched with oil money, jealousy and a deep-set rivalry lie beneath a veneer of glitz and opulence.

Decker soon realizes that the nearby ‘eye in the sky’, the Air Force Station, may hold the vital clues and that this town holds secrets so explosive that they could destabilize the entire country....

Walk the Wire by David Baldacci is the sixth book in the Amos Decker series.

Switch between reading the Kindle book & listening to the Audible narration with Whispersync for Voice.
Get the Audible audiobook for the reduced price of $12.49 after you buy the Kindle book.
Learn more about membership
By completing your purchase, you agree to Audible’s Conditions Of Use and Privacy Notice.
Sold and delivered by Audible, an Amazon company

4.4 out of 5 stars
4.4 out of 5
22,596 global ratings
How are ratings calculated?
To calculate the overall star rating and percentage breakdown by star, we don’t use a simple average. Instead, our system considers things like how recent a review is and if the reviewer bought the item on Amazon. It also analyses reviews to verify trustworthiness.

JH
2.0 out of 5 stars Is it just me?
Reviewed in Australia on 7 May 2020
Verified Purchase
I've read a lot of Baldacci books and I am always eagerly awaiting the next one. I've read the Camel Club series, King and Maxwell, Robbie, and Decker.. but this was disappointing.

The dialogue and plot progression was almost childish. It felt like the book was aimed at 12 year olds.

The climate change mantra was just annoying.. leave it out!

The ending was unbelievable.. facts never implied or disclosed prior suddenly emerged, the whole thing tied up with a ribbon on top.

It feels like the author was writing to a formula and basically just "phoning it in".

Maybe I've been spoiled by my recent forays into John Sandford and John Connolly.. I don't know.

prplxd343
5.0 out of 5 stars Enthralling
Reviewed in Australia on 3 June 2020
Verified Purchase
This is only the second book that I've ever given 5 stars. It was compelling reading, making me lose track of time and very reluctantly having to stop only when I was so dogtired that I couldn't make sense of what I was reading. I finished it in two sessions and now wish that I had read it more slowly so as to prolong the pleasure. The whole series has been excellent and this last book has been the topper. Hope there are more to come.
Read more
Helpful
Report abuse

Backplommer
2.0 out of 5 stars Glad that’s over
Reviewed in Australia on 17 May 2020
Verified Purchase
What can I say, just terrible, rambled on, easily the worst in the series, never had me at all, no real suspense, ordinary plot , not much action and always saved by the bell just to keep the storyline alive, I’m definitely no critic technically but couldn’t even read the last few pages, just glad that’s all there was left
Read more
2 people found this helpful
Helpful
Report abuse

Mirose
5.0 out of 5 stars Intricate and multi faceted thriller
Reviewed in Australia on 12 April 2020
Verified Purchase
The complex Amos Decker is not as complex as he used to be ,but his qualities of deduction, although more far fetched than usual are are believable.
Complex with two interwoven but separate plots, solved by more than one or two of Baldacci's hero's and heroines, still a very enjoyable read and real plots. Difficult to put down, but atbtimes too complex for a light read.
Read more
Helpful
Report abuse

kirribilligirl
TOP 500 REVIEWER
4.0 out of 5 stars Amos continues to evolve.
Reviewed in Australia on 2 May 2020
Verified Purchase
This was an excellent read, great plotting, pacing and excitement and tension on every page. I now know everything to know about fracking. My only complaint is I thought the motivation of the killer was too far fetched. However it still was a fun engrossing read.
Read more
Helpful
Report abuse

Chez
5.0 out of 5 stars Walk the wire
Reviewed in Australia on 18 January 2021
Verified Purchase
Bonus time David has hit the jackpot with this one. Or more realistically the readers have. Amos Decker, Jamison, Will Robie and Jessica Reel, altogether! Bonus bonus bonus - outstanding. Another unputdownable novel.
Read more
Helpful
Report abuse

Barry Hayes
4.0 out of 5 stars Was the plot clear enough to follow without going back through the story.
Reviewed in Australia on 26 January 2021
Verified Purchase
Several characters from previous Amos Decker novels were introduced and added to the intriguing storyline. That was a nice touch so long as you embraced those characters. The storyline was brilliant so long as you stayed in touch with the intense plot that really wasn't revealed until late in the novel.
Read more
Helpful
Report abuse

Sheila Bowell
1.0 out of 5 stars Not up to Baldacci's usual standard
Reviewed in Australia on 13 March 2021
Verified Purchase
I am still struggling through this book, it has taken weeks. Certainly not up to the standard of David Baldacci nor might I add Decker & Jamison. I have read all books in order, I will move on to the next one and see what it's like. I really love this author and have been reading his books for many many years.
Read more
Helpful
Report abuse
See all reviews

Savannahlady
2.0 out of 5 stars Seriously bad sadly
Reviewed in the United Kingdom on 18 April 2020
Verified Purchase
Not nearly as good as his other books. Very disappointing and quite ridiculous plotting. I’ve read all his books and enjoyed most for an uncomplicated ‘turn your brain off relax’ that we all need from time to time. But this was dreadful. Dump the awful Alex Jamieson - she scurries around asking inane questions and making silly school girl remarks - she is appalling. And why bring Will Robbie in as well - he comes across as a pretty thick muscleman, which in his ‘own’ books he is not at all.

You can do better, David
Read more
23 people found this helpful
Report abuse

S. Ivory
1.0 out of 5 stars What a waste of my time and money
Reviewed in the United Kingdom on 11 June 2020
Verified Purchase
WEll, if I hadnt paid £10 I would have given up on this book numerous times, but I stuck it out. What a waste of my time and money, it was seriously bad, and so boring! I have enjoyed all the Decker books so far, but this was absolute rubbish. Not a good plot, plots within plots that made no sense. Sorry, will have to think carefully before I but another Baldacci book.
Read more
14 people found this helpful
Report abuse

feelgood
1.0 out of 5 stars Disappointing
Reviewed in the United Kingdom on 29 May 2020
Verified Purchase
Sorry, having read pretty much everything David Baldacci has written up until this and enjoyed, this is awful. The most convoluted plot with luckily for Decker a mission impossible type mate who pops up when necessary. Agree with previous review re Jamieson, she doesn’t contribute anything to the investigation other than a great deal of “so why this and why that” and her eye rolling displeasure at Decker’s social ineptitude. And whilst we’re at it, where’s Hal Parker? Is he dead? Where’s the body? The body count with the previous murders is ridiculous...Bodies everywhere!
Loved all the previous Decker stuff but this is woeful. If this was my first read in the series, it would be my last.
Read more
12 people found this helpful
Report abuse

sophie dyer
1.0 out of 5 stars Very dull with tired and lazy writing
Reviewed in the United Kingdom on 28 May 2020
Verified Purchase
I am a big fan of Baldacci but this was extremely disappointing. It was dull from the beginning and I thought it was about to improve when Robbie came on the scene but unfortunately the dullness continued. I understand that Decker is changing but he's seems to be writings out all the mannerisms which have made the character and books so enjoyable. Robie's introduction was wasted and he could of been any CIA assassin. Displayed none of the character that he had developed over his own series of books. It seemed like ages waiting for the next book in this series and after reading it I wish I was still waiting. Tired and lazy writing.
Read more
9 people found this helpful
Report abuse

Keith
5.0 out of 5 stars A great Read with a complex yet simple plot.
Reviewed in the United Kingdom on 26 April 2020
Verified Purchase
I particularly liked the return of Will Robie, Jessica Reel and Blue man. It must be challenging to make the coming together of straight laced FBI agent with the darker side of The State work, but David Baldacci manages to achieve it. Ripping tale but I feel that Amos Decker and Alex Jameison need to be developed a little more into tougher characters. It is still not clear if Decker is overweight and flabby or if he has become fitter. As an FBI Agent i'm surprised he didn't carry his gun at all times and Alex Jameson should have become a little tougher following the previous books. I still really enjoyed the book.
Read more
6 people found this helpful
Report abuse
See all reviews