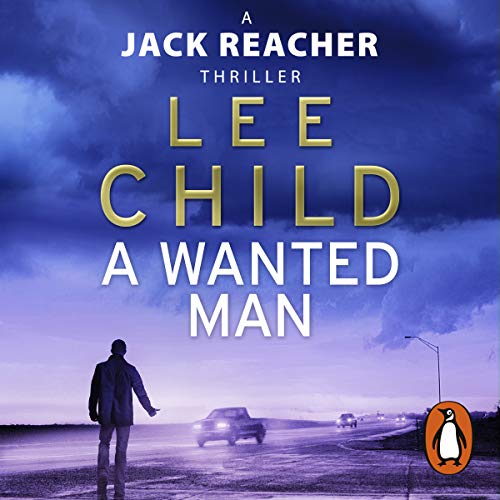 When you're as big and rough as Jack Reacher - and you have a badly-set, freshly-busted nose patched with silver duct tape - it isn't easy to hitch a ride. But Reacher has some unfinished business in Virginia, so he doesn't quit. And at last, he's picked up by three strangers - two men and a woman. But within minutes it becomes clear they're all lying about everything - and then they run into a police roadblock on the highway. There has been an incident, and the cops are looking for the bad guys....

With his signature Swiss-watch plotting and heart-thumping suspense, A Wanted Man shows Lee Child at his sublimely skilful best.

Switch between reading the Kindle book & listening to the Audible narration with Whispersync for Voice.
Get the Audible audiobook for the reduced price of $12.99 after you buy the Kindle book.
Learn more about membership
By completing your purchase, you agree to Audible’s Conditions Of Use and Privacy Notice.
Sold and delivered by Audible, an Amazon company

4.4 out of 5 stars
4.4 out of 5
12,550 global ratings
How are ratings calculated?
To calculate the overall star rating and percentage breakdown by star, we don’t use a simple average. Instead, our system considers things like how recent a review is and if the reviewer bought the item on Amazon. It also analyses reviews to verify trustworthiness.

Helen Newbey
3.0 out of 5 stars Good story
Reviewed in Australia on 10 July 2021
Verified Purchase
Used to like this author and jack reacher series but cant even finish this book. Too much over talking over thinking, story line weak. But we buying another one.
Read more
One person found this helpful
Helpful
Report abuse

Jonbee Faliu
5.0 out of 5 stars Awesome Read
Reviewed in Australia on 1 June 2018
Verified Purchase
I really enjoy reading Jack Reacher escapades and Lee Child's novels. He's a great writer and story teller. I would recommend him to everyone. So Not Wish that they not have casted friggin Tom Cruise as Jack Reacher. Grrr!, Idiots.
Read more
One person found this helpful
Helpful
Report abuse

Dryline
5.0 out of 5 stars Usual rollicking read
Reviewed in Australia on 10 January 2019
Verified Purchase
Good fun. Escape from daily grind into Reachers world. Who will they get to play him next ? ? ? ? Make more movies please.
Read more
Helpful
Report abuse

Rob
2.0 out of 5 stars not as good as other reacher stories
Reviewed in Australia on 26 August 2020
Verified Purchase
bit hard to follow toward the end of the book - first part flowed, second part was confusing.
Read more
One person found this helpful
Helpful
Report abuse

Kindle Customer
5.0 out of 5 stars Five Stars
Reviewed in Australia on 20 February 2016
Verified Purchase
How does he keep turning out such great Reacher stories ??
Read more
Helpful
Report abuse
See all reviews

MRB
1.0 out of 5 stars Sadly it left me bored rigid and glad when it was over...
Reviewed in the United Kingdom on 14 May 2018
Verified Purchase
I love the Reacher series and have read them in order from book 1 to 17 (this one) - but the one over-riding word that comes to mind with this book is 'Boring'. I was just thoroughly bored. Previous books have - in the main - been difficult to put down. This one was difficult to keep reading and became a real chore to get through and I was actually pleased when it was finally over. Sorry Lee - but that's how it left me feeling. The next book is apparently called "Never go back". I might just take that as direct advice after reading some of the reviews on that one...
Read more
11 people found this helpful
Report abuse

Jim C
1.0 out of 5 stars Time to kill off Reacher?
Reviewed in the United Kingdom on 9 July 2013
Verified Purchase
Previous Jack Reacher books have generally been of a very high level, and it was on the strength of these that I purchased "A Wanted Man". Very disappointing. As another reviewer wrote, a large section of the book takes place in the confines of a car. Frankly, this was really boring. When were we going to get to what Reacher does best, busting heads and solving mysteries?
When he eventually sets his mind to finding the bad guys you can almost hear the rustle of him donning his superman cape. He goes from wooden-headed driver (no chance of doing something to the bad guys early on? Really? Previous incarnations would have seen him flatten everyone around him and bed the girl without breaking sweat. Now he drives along and spends tens of thousands of words describing the scenery to us).
Superman costume donned he sets off and spots clues where there were none, makes deductions that would have Sherlock Holmes breaking his violin over Dr. Watson's head in frustration and generally being .. oh I don't know, Superman?
When I found myself re-reading a three-day old newspaper in preference to this rubbish, I gave up with only a couple of chapters to go, something I have never done before.
A very, very poor book that makes me wonder if Lee Child bothers to put in the work now he has made his money out of the Tom Cruise movie, or has just run out of ideas.
Any more of his and time to kill off Reacher.
Read more
16 people found this helpful
Report abuse

Vanda Denton
3.0 out of 5 stars Not one of his best
Reviewed in the United Kingdom on 2 March 2017
Verified Purchase
Not one of his best but very readable. The usual intrigue is there but I don’t know if I’d have enjoyed this book if I didn’t already know Jack Reacher.
I wanted more action, thrills, edge-of-my-seat stuff. I don’t need total realism. I get that in the newspaper. But the baddy was not realistic enough.
Don’t make this your first Reacher book. Enjoy an earlier one so that you won’t be put off these great stories.
Read more
9 people found this helpful
Report abuse

J. Potter
3.0 out of 5 stars Hard work and ultimately confusing
Reviewed in the United Kingdom on 10 April 2013
Verified Purchase
At the time of writing this review, Lee Child has eight books in the Amazon Thriller top 100 charts. The reason for this is simple, his books are extremely good. In my fourteen years reading his Reacher Thrllers I've only been disappointed by one ending and struggled reading one other. That is until this year.

Just as Worth Dying For followed directly on from the end of 61 Hours, A Wanted Man literally starts one van ride after Worth Dying For, where Reacher got pretty badly beaten up. He's heading to Virginia, so he sticks out his thumb, wipes the blood from his face and looks hopeful. Everybody passes him by, until good fortune smiles and a car with two men and a woman in the back stop. But this isn't the warm reprieve from the cold elements Reacher was hoping for. There's been a murder in a nearby town and the police are hunting for two men.

The first third of A Wanted Man plays much like any other Reacher novel. The story unfolds and gets increasingly complex, not only playing out through Reacher's perceptions in the car but also through the eyes of FBI and local police investigators. Child's unique viewpoint sucks us in. Reacher spends a lot of time in the car but it doesn't matter. The plotting is tight, the writing captivating. Then about a third of the way through we get a major turning point, a car is burning on a remote track. And then the story completely unwound for me.

Even now having finished listening to the Audio book and having gone back to re-read the last 100 pages of the hardback, I'm a little confused. It turns out I hadn't mis-heard or missed anything. That really was how it got resolved. The whole premise behind the story is confusingly and fleetingly explained.

Even worse was the sheer tediousness of getting through the last two thirds of the story. In contrast to the first third where the car journeys were captivating, save for some weird morse-code eye blinking, the last two thirds we're all over the place, 300 long miles in a car here and then back again, 100 long miles there. Child is usually succinct but he goes on and on. Endless descriptions of cars and their movements, mysterious FBI and CIA agents coming out of the woodwork but little context, McDonalds product placement gone crazy, car journeys so full of exposition its an act of reader devotion staying on the journey. Made worse for me by the fact the audio book read by Jeff Harding made Reacher sound like a Chicago thug.

Finally, I had originally bought the hardback on release in 2012, because it was cheaper than the Kindle, much to my annoyance. I found my world is so tied to digital books that I kept forgetting the hardback and hadn't read much through Christmas (usually the book is done three days after launch). So when I had Audible credits this March I got the unabridged version. I've now learned my lesson. While Lee Child, or for that matter any author's Kindle release is marked up to the hardback price or higher, I simply won't buy them in any version.

Bill
3.0 out of 5 stars Lee Child is letting his fans down big time
Reviewed in the United Kingdom on 18 November 2012
Verified Purchase
I was disappointed by the last 2 Reacher novels , I have read all the others up to and including 61 Hours and was a real Reacher fan and was hoping for a return to form.

Sadly , A Wanted Man is the worst one yet, a real clunker of a book with a story that only sees a bit of action in the last 25% of the book.

I will bet the diminutive Tom Cruise will be thankful as apart from the Reacher analytical mind, the action is comparably light and the big guy impact is somewhat inconsequential in this plot, only real reference is that Reacher is referred to as a "gorilla with a busted nose" , so I feel that this story has been made with Cruise in mind.

Wont be paying premium prices for your books anymore Mr Childs, or watching the film- The Reacher novels has run its course for me, will still recommend them to new readers, but like AC/DC , will point out that the last couple of releases where just cashing in on the fact that fans will buy the new stuff if its any good or not.

There are an abundance of writers out there that try really hard and yield fresh material, like Sean Platt & David Wright and the Yesterdays Gone novellas - Borichio would kick Reachers ass, Authors like Felix Riley who writes taught techno crime novels with a main character who is like Reacher and James Bond into one, like Simon Lelic who writes good engaging plots that build momentum to an explosive finish. And guess what - no premium price - real value for money, Lots of Platt & Wrights material is offered free but I buy because good authors need the money, I think Lee Childs has been cashing in on his faithful who are now turning away in droves due thanks to the last few turkeys of books and a film which is no doubt very good but, Tom Cruise in the leading role ?, come on !...

My money from now on is going to support the lesser aforementioned legions of writers, not paying £10 for a kindle novel like this ever again.
Read more
Report abuse
See all reviews