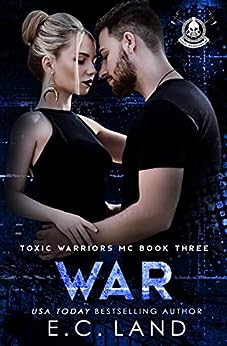 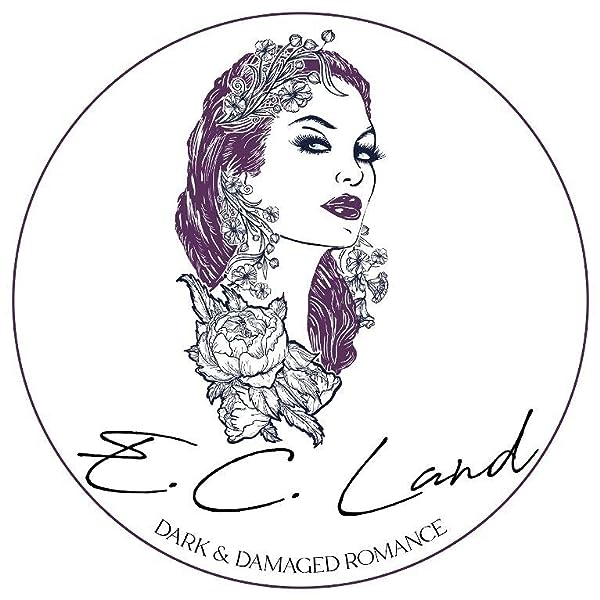 by E.C. Land (Author), Clarise Tan (Illustrator), Kim Lubbers (Editor) & 0 more Format: Kindle Edition
Book 3 of 3: Toxic Warriors MC
See all formats and editions
Sorry, there was a problem loading this page. Try again.
I’ll do anything to keep her safe.
War
I swore I’d never fall for a woman again. Not after the trouble I’ve been through. They’re nothing but a headache. Then I saw her—hopeless and fighting to survive.
Something inside me sparks to life, and now she’s mine to protect. I just gotta show her I mean what I say, and I’m not like others. Just as she’s showing me, she’s not the same as those in my past.
Read more
Previous page
Next page

E.C. Land is a MC and Dark Romance author who lives in the countryside of Virginia. She started her publishing journey writing MC romance, but she now has an undying love for writing in all sub-genres of dark romance.

4.4 out of 5 stars
4.4 out of 5
612 global ratings
How are ratings calculated?
To calculate the overall star rating and percentage breakdown by star, we don’t use a simple average. Instead, our system considers things like how recent a review is and if the reviewer bought the item on Amazon. It also analyses reviews to verify trustworthiness.

Doris
TOP 500 REVIEWER
5.0 out of 5 stars The Biker and The Gypsy
Reviewed in Australia on 26 May 2022
War was every bit the bad boy biker with the MC and Shyann was the gypsy lady with a podcast who just happened to be the friend to War/Enzo’s sister, Gianna, without either of them knowing it at the time of their first hook up. But then that second meeting of the two brings a lot to the forefront when Shyann walks into the clubhouse to bring Gianna her belongings only to have War go off on her accusing her of chasing after him because he has no idea that his sister and Shyann are friends.

Now is the time for groveling if War wants another chance with Shyann. She’s just afraid to really let him in because everyone else in her life has always left her and she doesn’t want that kind of heartache in her life. She’s also dealing with a stalker at this time which may have her life on the line. Would War be able to protect Shyann if he’s busy throwing her away?

I read this book in one sitting because I couldn’t put it down. The drama and steam were what I loved about War and Shyann’s story. Would these two ever be able to find their HEA?
Read more
Helpful
Report abuse

MarieD
TOP 1000 REVIEWER
5.0 out of 5 stars The Gypsy won the War.
Reviewed in Australia on 30 May 2022
This book was a pleasure to read Enzo the constant bachelor who doesn't want to commit finds that one girl who just won't leave his mind even after he told her to let herself out..Shyann has always felt that everyone has left her so when she has a pleasurable night with Enzo she is yet again hurt when she is cast aside little does she know that same guy is her best friends brother who is supposed to be a top bloke.
Shyann isn't afraid to voice her opinions as she works on her podcasts yet she attracts the attention of a stalker. Loved that Shyann is a little eccentric in her Gypsy style and War just loves her that way.
Yet again another winner of a read and can't wait for more from this club.
Read more
Helpful
Report abuse
See all reviews

obsessive reader
3.0 out of 5 stars Honesty?
Reviewed in the United Kingdom on 25 July 2022
Verified Purchase
Hmm...I usually like this author but for some reason this one felt different. I like spicy as much as anyone else but this felt particularly...male orientated?...it was all about her body and getting sex as much as possible...plus there was a hint of (by her supposed love interest) ridiculing her lifestyle,clothing..personality..by the end I wasn't a fan of either characters. Still,an OK read even if I did skip a few (or more) sex scenes
Read more
Report abuse

Kindle Customer
4.0 out of 5 stars Good read
Reviewed in the United Kingdom on 8 June 2022
Verified Purchase
Another really good book in this series. The story is gripping and keeps you turning the pages. The characters are well thought out and the story flows well.
Read more
Report abuse

Kal
4.0 out of 5 stars loved it…
Reviewed in the United Kingdom on 26 May 2022
Verified Purchase
I loved it. Just something about Shyann’s way.

War def pulled his head out his **** in the end so that’s all good.

Client d'Amazon
5.0 out of 5 stars Dream Catcher
Reviewed in France on 24 May 2022
Verified Purchase
It is definitely one of my favorite couples ever. I loved reading about Shyann style and boheme life and the way War adores her while being a big brute to everyone else.
Read more
Report abuse

Tawnya
1.0 out of 5 stars Toxic Wussies is more like it.
Reviewed in the United States on 6 June 2022
Verified Purchase
War or Enzo, had a rough childhood. Supposedly keeps a close eye on his sister, yet doesn't know who her best friend is. Can't get the one night stand out of his head, who surprise surprise is.. the sister's best friend! Two weeks after their one night stand, the sister needed to be rescued. When she needs new clothes, the BFF comes in for the win. War sees her walking into the clubhouse, turns all nasty on her. She hands over the stuff and leaves. He chats with his sister and then runs after the BFF. Blah blah, forgive me. Blah blah, harder Enzo. Sweet times then after leaving the place of the man threatening her, War is in an accident. Hospital room.... He pushes her away, because he doesn't believe she can handle the life. Two months later, she is in the clubhouse to give him proof of what he left behind when he turned into a coward. Again, he chases after her. To become her hero when the man who was given a beat down for threatening her, shows up in her home. Dead body, sheet tango time and all is happy.

The h is passive with everyone and everything. So passive, I forgot her name. Definitely was not the book I was hoping to read. Sadly, a complete waste of my time.
Read more
One person found this helpful
Report abuse
See all reviews
Report an issue
Does this item contain inappropriate content?
Report
Do you believe that this item violates a copyright?
Report
Does this item contain quality or formatting issues?
Report