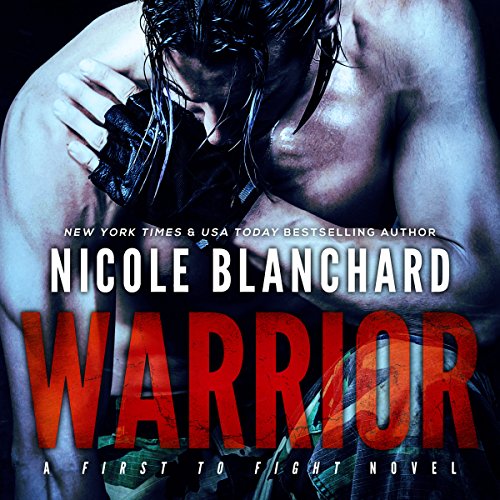 I thought it was just one night with my brother's best friend.

The boy I had dreamt about since he gave me my first kiss, under the lights of the Ferris Wheel.

I knew he was about to leave for a year - no chance for a future.

But our one night together would create memories for a lifetime.

Our paths crossed again, but I had lied, and he was no longer the man he once was. He was warring against demons. Against the silence that was threatening to swallow him. And I had kept a secret from him, one he would never forgive me for.

But my secret was about to be ripped open. Displayed for the world on national news. And I had only one way to repair the damage.

I had to trust the man I lied to.

The man I never got the chance to make a life with.

The only man who could save what we had created together.

Last chance - Ends Tuesday!
Learn more about membership
By completing your purchase, you agree to Audible’s Conditions Of Use and Privacy Notice.
Sold and delivered by Audible, an Amazon company
Share

4.3 out of 5 stars
4.3 out of 5
90 global ratings
How are ratings calculated?
To calculate the overall star rating and percentage breakdown by star, we don’t use a simple average. Instead, our system considers things like how recent a review is and if the reviewer bought the item on Amazon. It also analyses reviews to verify trustworthiness.

Susan murray
4.0 out of 5 stars Warrior
Reviewed in Australia on 29 November 2021
Verified Purchase
Ben and Olivia’s story has suspense and a curveball you don’t see coming.
It is an enjoyable read but more should have been written about Ben’s time in hospital so we understood more and a solution to his efforts to find team mate would have been good
Read more
Helpful
Report abuse

Doris
TOP 500 REVIEWER
5.0 out of 5 stars Love and Bombshells
Reviewed in Australia on 10 September 2017
Surprise!! That’s what you will get with this book. It was a war veteran, a friend’s sister, and a suspense story all rolled up in a book that was hard to put down. The love was heartwarming and the “who done it” was a bombshell. The author did a great job of giving me a strong female character in Olivia and with Ben she made him in to a guy that most people would love to have in their life. For me this definitely won’t be the last time I read this author. I can’t wait to see what’s next.

I received this book as an ARC for a freely given and honest review.
Read more
Helpful
Report abuse

They mystery of Olivia's unexplained threats to her life was I thought well entwined throughout the romantic storyline. I loved the determination, inner strength and stubbornness of Olivia to create a life when obstacles are thrown at her and the military background was told in a thoughtful and respectful way.

The emotion and strength expressed by Olivia made me absolutely love her and I wanted her and Ben to have their second chance at romance.

The extended family and friends also provided a great source of humour and sentimental moments.

I did not pick the dangerous connection in Olivia's life until the end and thought it was woven really well into the history of this group of family and friends.

This is a fantastic read and its one of those stories I would pick up again.

Gillian
5.0 out of 5 stars WOW !!!
Reviewed in Australia on 20 January 2020
I loved this book.
Olivia and Ben have a one night together before he gets deployed.
Olivia finds out she is pregnant and tries to get in contact with Ben but to no avail.
This book had all the feels and was a good book
Recommend this read and the series.
I received a free copy of this book via booksprout for an voluntarily honest review.
Read more
Helpful
Report abuse

K. M. Whittaker - Page Flipperz Blog
5.0 out of 5 stars A stunning story of true love, survival . Moving Forward and New beginnings.
Reviewed in Australia on 12 May 2016
Warrior is the first book from this author that I have read and it certainly wont be my last.

I was hooked within the very first page, till the very last word.

With solid characters with depth and definition , the author delivered this story with a lot of thought and detail.

A perfect blend of humour, turmoil, suspense, love and angst. Warrior is a story that will certainly hold a place on your bookshelf not only for the story line but the characters who will bury themselves in your soul.

Some moments within the story are raw and heartbreaking, I wiped a tear away here and there and really felt for the heartache and turmoil that the characters went through. The author has her way with words, pulling at your heart strings, having you sheepishly grinning, fanning oneself or laughing at certain moments and even oooing and arghing. !

I love this authors writing style.

The plot was well delivered, crisp, well detailed in relation to PTSD as well as the heart condition that was mentioned within the story.

I throughly enjoyed the alpha male and strong willed female lead in this story.

Ben and Livvie were a perfect pair, the love and sexual chemistry was off the charts and I could see and feel all emotions the characters dealt with - confusion, love and heartache within there lives.

The secondary characters played there part. Strong and bountiful. As a reader they were delivered with the same depth and definition as the main characters and truly has there moments within the story line.

The plot twist certainly had me back tailing thinking WTF !! I never saw this coming and it was well revealed and had my twinging in my seat .

Overall, I highly recommend this story to all. But be prepared for some this could be a trigger, or you may know someone who has been affected by PTSD. In some scenes I even found myself teary .

Tiltob
4.0 out of 5 stars Great read
Reviewed in the United Kingdom on 28 September 2015
Verified Purchase
This was a great read. I enjoyed all the history between the characters and how the story was split into parts to allow for the passage of time. The ending and epilogue was good too, but there was just something missing for me and I can't pinpoint what.
Read more
Report abuse

Sandra Parker-Groulx
5.0 out of 5 stars HEA
Reviewed in Canada on 6 December 2021
Verified Purchase
Wow what a roller coaster ride. Poor girl has nothing but bad luck. Unplanned pregnancy, baby daddy comes home injured, loses her only parent, has a sick baby, baby gets kidnapped then she gets kidnapped. All in the span of a year or two.
Read more
Report abuse

Birty53
3.0 out of 5 stars Too much too much!
Reviewed in the United States on 10 April 2016
Verified Purchase
SPOILER ALERT! SPOILER ALERT!
I will be mentioning things in my review that might spoil this story for some readers. I only do this to help the reader understand my problems with this story.

Ben is a Marine about to deploy to Afghanistan. He finally gives in to his attraction to his best friend's sister, Olivia. They have hot, unprotected sex the night before he leaves. Ben asks Livvie to wait for him and she says yes because she's always been attracted to him, too. Flash forward a few months and Livvie finds out she's pregnant. She sends emails, her only form of communication with Ben, to let him know but hears nothing from him. Now here's where the "how much can we make s@&! happen in Livvie's life" begins. Wayyyyyyy too much stuff!
1. Livvie finds out that her unborn child has a life threatening heart condition that will require major surgeries at his birth.
2. Her dad dies of an unexpected heart attack.
3. Someone breaks into her house and tries to harm her and her baby.
4. Ben returns home with hearing loss, PTSD, and tramatic brain injury and remorse for the deaths of his men. In other words, screwed up and not wanting a relationship with Livvie or anyone else.
5. Ben just happens to see cop cars at Livvie's house. He sees Livvie with the baby and IMMEDIATELY accuses her of being with another man. So much for "I always wanted you." Such a d@&!head.
6. And, Livvie lets him get away with it, and makes no effort to defend herself or correct him. Hello!
Then, ....
7. Ben disappears again.
8. Livvie has a scare with the baby's heart.
9. Livvie is shot.
10. Ben just moves in to protect them.
11. The baby is kidnapped at a fair, but found unhurt.
12. Then Livvie is kidnapped by her father's girl friend, but really Livvie's natural mom who blames Livvie for the death of Livvie's dad and little brother, but Livvie is rescued.
And through all this mess, Ben hassles Livvie about not telling him about his son and LIVVIE LETS HIM. Give me a break!

zoey
1.0 out of 5 stars Four seasons of a soap opera in one story…
Reviewed in the United States on 28 November 2021
Verified Purchase
Spoilers- skim

Second chance, secret baby, H in love with best friend’s sister, PTSD issues, deaths, deranged woman kidnapping the h and her child are part of the storyline. I might have missed three seasons of All My Children during the skimming.

Add in a doormat h who doesn’t stand up for herself and a woe is me H and you got the complete story.

The author jammed too much drama into one book. It was like four seasons of a soap opera. The only cliche not thrown into the story was who shot JR.
Read more
2 people found this helpful
Report abuse

Kindle Customer
5.0 out of 5 stars A passion packed first, second, third story
Reviewed in the United States on 21 April 2018
Verified Purchase
I really liked this book. I liked how they go through real traumatic instances involving soldiers, birth, and I liked the drama that was added with the stalker/kidnapper person. But most of all I loved the love between Ben and Olivia. There was passion, understanding, forgiveness, and romance. It was great to see them as they dealt with everything together, even when they weren't "together". But I really liked how the author was able to show progress, change, with how the characters evolved. It's really hard to do that well and I thought it was a big part of this story. I salute you, for that. Cole was a sweet heart and I loved Jack as well. A very good, very well rounded story. Loved it. Downsides? Not many, wish we could have gotten more info on the "perp" about why they did what they did. I mean they were very clearly crazy but a little more info on that background info would've been nice. And I would have liked therapy for Ben. It's not a weakness but it's important for trauma. And lastly, given that they got pregnant after one time it shouldn't have taken her that long at the end to conceive again since one of the last things we read before the "epilogue" is no condom lovey-dovey-ness. But still loved it!
Read more
4 people found this helpful
Report abuse
See all reviews
Back to top
Get to Know Us
Make Money with Us
Let Us Help You
And don't forget:
© 1996-2022, Amazon.com, Inc. or its affiliates