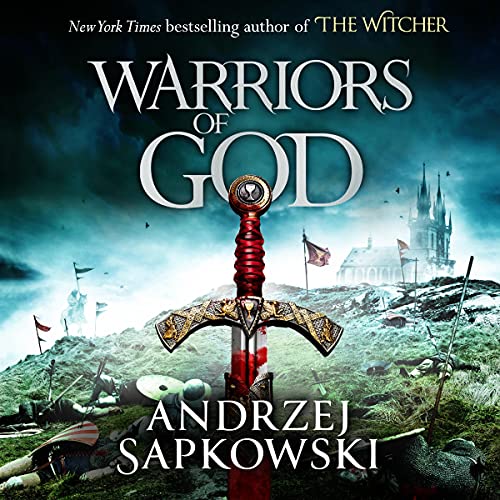 Warriors of God: The second book in the Hussite Trilogy, from the internationally bestselling author of The Witcher

Warriors of God, the second volume of the Hussite Trilogy by Andrzej Sapkowski, author of the best-selling Witcher series, depicts the adventures of Reynevan and his friends in the years 1427-28 as war erupts across Europe.

Reynevan begins by hiding away in Bohemia but soon leaves for Silesia, where he carries out dangerous secret missions entrusted to him by the leaders of the Hussite religion. At the same time, he strives to avenge the death of his brother and discover the whereabouts of his beloved. Once again pursued by multiple enemies, Reynevan is constantly getting into and out of trouble.

Sapkowski's deftly written novel delivers gripping action full of numerous twists and mysteries, seasoned with elements of magic and Sapkowski's ever-present - and occasionally bawdy - sense of humour. Fans of the Witcher will appreciate the rich panorama of this slice of the Middle Ages.

Switch between reading the Kindle book & listening to the Audible narration with Whispersync for Voice.
Get the Audible audiobook for the reduced price of $11.49 after you buy the Kindle book.
Learn more about membership
By completing your purchase, you agree to Audible’s Conditions Of Use and Privacy Notice.
Sold and delivered by Audible, an Amazon company

4.5 out of 5 stars
4.5 out of 5
129 global ratings
How are ratings calculated?
To calculate the overall star rating and percentage breakdown by star, we don’t use a simple average. Instead, our system considers things like how recent a review is and if the reviewer bought the item on Amazon. It also analyses reviews to verify trustworthiness.

There are 0 reviews and 10 ratings from Australia

Ian Stevenson
4.0 out of 5 stars Many changes of pace but a good read
Reviewed in the United Kingdom on 23 July 2022
Verified Purchase
I did enjoy this book, maybe a bit confusing with all the character names and changes of pace but overall an interesting book with enough to keep the reader engaged. a bit waffly in places but underlying story keeps you hooked
Read more
Report abuse

Melissa
5.0 out of 5 stars I enjoy this series more than the Witcher.
Reviewed in the United States on 2 April 2022
Verified Purchase
I love this series, im a bit of a history nerd so I may be an impartial judge, but the way fantasy and history are entwined in these books is sublime. I eagerly await the 3rd installment.
Read more
Report abuse
See all reviews