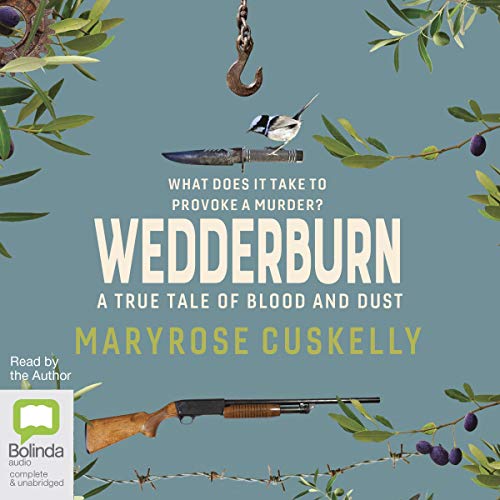 Wedderburn: A True Tale of Blood and Dust

The story of a grisly triple murder in rural Australia - contemporary true crime at its best.

'The slaughter was extravagant and bloody. And yet there were people in the small town of Wedderburn in Central Victoria who, while they did not exactly rejoice, quietly thought that Ian Jamieson had done them all a favour.'

One fine Wednesday evening in October 2014, 65-year-old Ian Jamieson secured a hunting knife in a sheath to his belt and climbed through the wire fence separating his property from that of his much younger neighbour Greg Holmes.

Less than 30 minutes later, Holmes was dead, stabbed more than 25 times. Jamieson returned home and took two shotguns from his gun safe. He walked across the road and shot Holmes' mother, Mary Lockhart, and her husband, Peter, multiple times before calling the police.

In this compelling audiobook, Maryrose Cuskelly gets to the core of this small Australian town and the people within it. Much like the successful podcast S-Town, things aren't always as they seem: Wedderburn begins with an outwardly simple murder but expands to probe the dark secrets that fester within small towns, asking: is murder something that lives next door to us all?

Switch between reading the Kindle book & listening to the Audible narration with Whispersync for Voice.
Get the Audible audiobook for the reduced price of $4.49 after you buy the Kindle book.
Last chance - Ends Thursday!
Learn more about membership
By completing your purchase, you agree to Audible’s Conditions Of Use and Privacy Notice.
Sold and delivered by Audible, an Amazon company

4.1 out of 5 stars
4.1 out of 5
20 global ratings
How are ratings calculated?
To calculate the overall star rating and percentage breakdown by star, we don’t use a simple average. Instead, our system considers things like how recent a review is and if the reviewer bought the item on Amazon. It also analyses reviews to verify trustworthiness.

maureen sindoni
5.0 out of 5 stars Trama
Reviewed in Australia on 22 October 2018
Verified Purchase
Well written. Easy to read. Could be in any place during drought heat and perceived threat. Showed the personalities well and how family upheaval and a troubled personality could collide tragically. Shows family loyalties.
Read more
Helpful
Report abuse

julie
5.0 out of 5 stars A fantastic writer
Reviewed in Australia on 23 April 2019
Verified Purchase
Maryrose Cuskelly has a great turn of phrase. She has dealt with a shocking story in a sensitive and riveting style. A great read. Hard to put down.
Read more
Helpful
Report abuse

Jennifer
TOP 10 REVIEWER
4.0 out of 5 stars ‘The slaughter was extravagant and bloody.’
Reviewed in Australia on 26 August 2019
On a fine evening in October 2014, in the small community of Wedderburn in Victoria, Ian Jamieson (aged 65) climbed through the wire fence separating his property from that of his neighbour Greg Holmes. Within 30 minutes, Holmes was dead. He had been stabbed more than 25 times. After returning home and collecting two shotguns from his gun safe, Jamieson walked across the road and shot Holmes’s mother, Mary Lockhart and her husband Peter, multiple times. He then called the police.

Why did Ian Jamieson murder three people? What caused him to murder three of his neighbours in this small community?

In this book, Ms Cuskelly attempts to find some meaning behind Ian Jamieson’s actions, some reason for these brutal murders. Jamieson originally pleaded guilty to the murders of Mary and Peter Lockhart and not guilty to the murder of Greg Holmes. He then switched to a third guilty plea, and then tried to return to a not guilty plea. These changes (and attempted changes) resulted in a technical legal argument which overshadowed the crimes and the victims.
Ultimately there was no trial, and Jamieson was sentenced to life in prison in 2016.

‘It is a fearsome thing, the pronouncement of a sentence; an attempt to render justice for a crime for which there can be no real reparation.’

Jamieson appealed against the sentence in 2017: his appeal was disallowed.

I read this book and found no answers. Yes, it seems that there was tension between Jamieson and his neighbours over several different issues. But the issues seem comparatively small to this outsider. I guess we’ll never really know what caused Ian Jamieson to snap and to murder his neighbours. Ms Cuskelly does raise a possible explanation, of a friendship between Peter Lockhart and Ian Jamieson which turned sour, but I’m left wondering, dissatisfied, unsettled.

At the end of the book, Ms Cuskelly writes:

‘On my drive back to Melbourne, I feel I have caught a glimpse of what lies beyond this tale of murder, grief, cruelty, obstinacy and hard-headedness.’

We have the events, some (limited) sense of the impact of these murders on the community, and Jamieson’s self-pity.

A glimpse perhaps, but no answers.

Patrice McCarthy
5.0 out of 5 stars Engrossing
Reviewed in the United States on 25 November 2018
Verified Purchase
This is a pretty depressing story and yet I had to keep reading. Not because I was held in suspense about how it would all end up. More because the "characters" became increasingly real and vivid. The awful consequences of failure to empathise and compromise and comunicate are recorded in distressing detail. I appreciate that the author did not try to inject any sort of sugar coating.
Read more
Report abuse
See all reviews