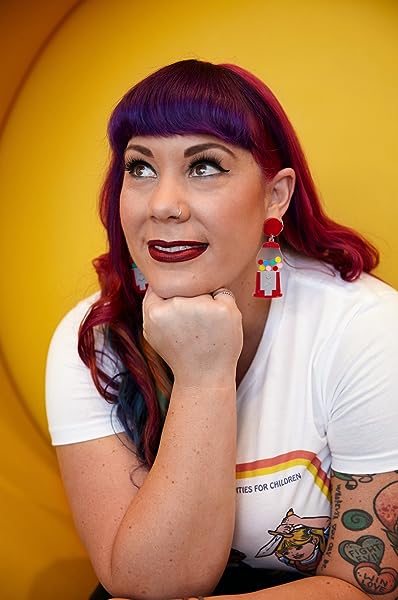 by Maria Lewis (Author)
4.8 out of 5 stars 13 ratings
See all formats and editions
Sorry, there was a problem loading this page. Try again.

If there are two things werewolf Tommi Grayson is good at, it's shit-talking and killing. She has been doing a lot of both over the past few months as part of a supernatural squad tasked with hunting down the last members of an evil cult in Ireland.

However, things are never quite as simple as point and shoot.

Mortality and betrayal weigh heavy on her heart as she attempts to return to some semblance of a normal life with the rogue werewolf pack she has befriended in Berlin.

Yet the supernatural world around her is changing.

Things are in motion, things she doesn't quite understand. With those close to her suddenly in the crosshairs, Tommi finds herself forced to choose a side in a war she didn't even know she was fighting.

From the Aurealis Award-winning author of The Witch Who Courted Death and The Wailing Woman comes the sixth adventure in the Supernatural Sisters universe.

"Maria Lewis has created her own pop culture universe." - The Daily Telegraph

"Maria Lewis is a must-read." - BuzzFeed

"The next True Blood." - NW Magazine

Maria Lewis is an author, screenwriter and journalist based in Australia. Her best-selling debut novel Who's Afraid? was published in 2016, followed by its sequel Who's Afraid Too? in 2017, which was nominated for Best Horror Novel at the Aurealis Awards in 2018. Who's Afraid? is being developed for television by the Emmy and BAFTA award-winning Hoodlum Entertainment. Her Young Adult debut, It Came From The Deep, was released globally on October 31, Halloween, 2017 and is a twist on The Little Mermaid meets Creature From The Black Lagoon. Her fourth book, The Witch Who Courted Death, was released on Halloween, 2018 and won Best Fantasy Novel at the Aurealis Awards in 2019. Her fifth novel set within the shared supernatural universe - The Wailing Woman - was nominated for Best Fantasy Novel at the 2020 Aurealis Awards. She was the host of the limited podcast series Josie & The Podcats about the 2001 cult film.
Start reading Who's Still Afraid? on your Kindle in under a minute.

Maria Lewis is an author, screenwriter and journalist based in Australia. Getting her start as a police reporter, her writing on pop culture has appeared in publications such as the New York Post, Guardian, Penthouse, i09, The Daily Mail, Empire Magazine, Huffington Post, Screen Australia and many more.

She’s the best-selling author of the Aurealis Award-winning Supernatural Sisters series, which is published globally and includes the novel Who's Afraid? (currently being adapted for television by the BAFTA and Emmy Award-winning production company Hoodlum Entertainment).

As a screenwriter, she has worked across live nightly news programs like The Feed for SBS and Cleverfan for ABC, as well as children's animation and live action genre programming. She's the producer, writer and host of the limited podcast series Josie &amp; The Podcats about the 2001 cult film.

4.8 out of 5 stars
4.8 out of 5
13 global ratings
How are ratings calculated?
To calculate the overall star rating and percentage breakdown by star, we don’t use a simple average. Instead, our system considers things like how recent a review is and if the reviewer bought the item on Amazon. It also analyses reviews to verify trustworthiness.

Mariska de Bruin
5.0 out of 5 stars Suspense guaranteed
Reviewed in Australia on 8 August 2021
Verified Purchase
I have read all of Maria Lewis's books and they all, including this one, keep you on the edge of your seat. Couldn't put it down. Love it
Read more
Helpful
Report abuse
See all reviews
Back to top
Get to Know Us
Make Money with Us
Let Us Help You
And don't forget:
© 1996-2022, Amazon.com, Inc. or its affiliates