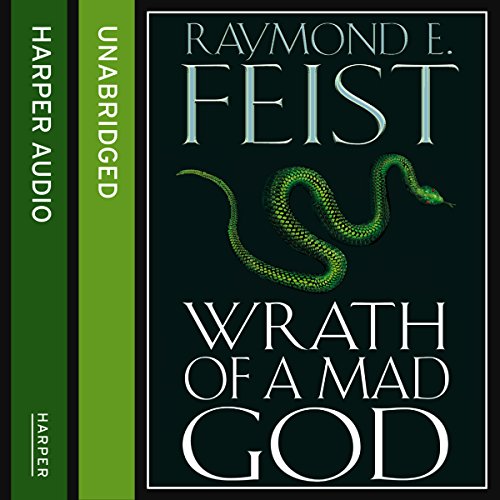 The third book in the hugely successful Darkwar series from the world-wide bestselling author of Magician. The Darkwar has fallen upon the worlds of Kelewan and Midkemia - a time of heroes, trials and destruction.

Following their dangerous mission to the realm of the alien Dasati, Magnus and the other members of the Conclave must now find a way to use what they discovered to help save their own people from the wrath of a mad god.

Switch between reading the Kindle book & listening to the Audible narration with Whispersync for Voice.
Get the Audible audiobook for the reduced price of $25.46 after you buy the Kindle book.
Final days - Don't miss out!
Learn more about membership
By completing your purchase, you agree to Audible’s Conditions Of Use and Privacy Notice.
Sold and delivered by Audible, an Amazon company

4.7 out of 5 stars
4.7 out of 5
380 global ratings
How are ratings calculated?
To calculate the overall star rating and percentage breakdown by star, we don’t use a simple average. Instead, our system considers things like how recent a review is and if the reviewer bought the item on Amazon. It also analyses reviews to verify trustworthiness.

Asokasanity
4.0 out of 5 stars Another fantastic read of fiction
Reviewed in Australia on 22 October 2019
Verified Purchase
Thank you Mr Feist again, for the entertainment and joy. I get lost in the physics sometimes but LOVE the characters
Read more
Helpful
Report abuse
See all reviews

G. Maudsley
3.0 out of 5 stars The best since the Serpentwar Saga, but still doesn't recapture the magic of old
Reviewed in the United Kingdom on 15 August 2011
Verified Purchase
I finished this book feeling fairly satisfied with the ending: questions were answered - major ones - character arcs were tied off, and storylines were brought together and concluded. But it simply doesn't captivate like the Riftwar and Serpentwar Sagas.

The characters aren't developed, explored and furthered enough; I never feel like I know or can relate to many of Feist's newer characters. I also feel I'm losing touch with Pug and Tomas (barely used, and where he was, it didn't really fit into the conclusion), as their emotions and motivations aren't explored as they used to be, or as authors like Jordan or Martin might do. To be fair, Feist has always focused on scope, grandeur and philosophy (and on this last he's still the best), but it wouldn't kill him to explore his main characters more fully. Instead the feeling is that he's ploughing on doggedly for the ending - the last 30% - the best stuff of this entire Darkwar Saga.

And this last 30% IS really good. Oldschool Feist - scope, ambition, twists, ruthlessness and a load of action and magic. Very entertaining stuff. We find out the truth about that mercurial and brilliant character, Nakor, and the strange young warrior, Ralan Bek. Bek is one of Feist's best creations since Serpentwar, and his nature and abilities were always a pleasure to read about. The truth behind Nakor wasn't handled as well as it could have been, but was by no means a failure - it is just that you can sum his role up in a sentence, instead of listening to the luxury of his life story, as every Nakor fan yearns to do. We also have a twist in the foes the Conclave think they are facing - a good one, but one that reminded me too much of a big one we've witnessed before. Come to think of it, we've witnessed it twice before...

These two characters are arguably the most interesting in the whole series, and it remains a mystery why Feist opened this Darkwar trilogy with Caleb's two foster-sons, Tad and Zane, who feature in only a couple of scenes in the whole book. Feist's lack of conviction in these two characters was evidenced in 'Into a Dark Realm' when Jommy dwarfed the other two boys, who one can only assume were introduced as carbon-copies of the much-missed Roo and Erik.

Speaking of carbon-copies, and under-used and surplus-to-requirements characters, Feist again mines his glory days to try to reinvigorate a less-fresh series by introducing, out of left-field, another Jimmy the Hand. It was painful to witness, although the character was in himself likeable enough. Not only was he shamelessly named similarly, he had every attribute bar brilliant sorcerer, and one wonders why this guy wasn't brought in earlier, as he plays an important part and can seemingly do everything the unforgiving world of Midkemia can throw at him.

Erik does feature, but it's another reliving of glorious days past, and while it's a pleasure having Erik on my page again, he doesn't have the relevance he used to, and is essentially a 'yes-man' to the Conclave of Shadows.

But this story is all about Pug, really, and I think there's a sense that the prophecy delivered him years before in the halls of death is finally on the road to being understood. It's no secret Feist is ending the cycle in five books time, and I think he's getting everything out of the way to make way for a grand finale - here a trip to another realm, and a longer look at a foe not really seen since the early days. There's exploration of the role of the gods in the universe and the nature of the various realities - stuff Feist fans wait for with bated-breath, but it somehow feels a little confused and less sure than it used to. It may be that all the retconning seen in this book is catching up with him.

This last is very frustrating, coupled with the multiple continuity errors and poor editing. This, Feist suggests, is down to outsourced copyediting - an insult to Feist by his publisher, in my opinion. Surely they can afford to have someone who knows his books well read an early draft to pick up the bad continuity errors? Not only this, but the editing itself is poor. Whoever proofread this should be ashamed.

In summary, though, this does have a lot to like about it: the increasing pace and tension of the ending, the epic nature of the final struggle, a couple of cracking twists, revelations, and the beauty of Feist's universes. But it doesn't have the conviction and purpose of earlier works, and by those, we will always judge him.
Read more
3 people found this helpful
Report abuse

Ellie
4.0 out of 5 stars Proof reading?
Reviewed in the United Kingdom on 3 March 2022
Verified Purchase
I love Feist, read all his works and now upgraded everything to kindle. The only reason i cannot give 5 stars is the awful editing which seems to be and issue in all his books after the rift war cycle. One or two in a book are easy enough to ignore but it's literally every few pages.
Read more
Report abuse

Mike Davies
5.0 out of 5 stars Well, who'd have seen that coming
Reviewed in the United Kingdom on 7 April 2014
Verified Purchase
What has been a trilogy of defining plot twists and the development of some of the lesser characters, this story finished with a bang. Not since the emerald queen decimated the western kingdom has feist changed the landscape, a nod to the other races of kelewan seemed a bit forced, adding little other than nostalgia. That aside the sadness with which this finished was well written despite the unusual twist. I do hope for a return of the nameless one, you know who I mean...
Read more
Report abuse

shawn hamer
5.0 out of 5 stars Brilliantly written.
Reviewed in the United Kingdom on 30 June 2018
Verified Purchase
Like all of Raymond E Fiest books I've spent many hours engrossed within the story of Pug the Magician to the Magician End. Best story I've had the pleasure to read.
Read more
Report abuse

M. Haywood
5.0 out of 5 stars Superb Feist
Reviewed in the United Kingdom on 8 May 2013
Verified Purchase
Feist has come a long way since his original trilogy 'Magician, Silverthorn and Darkness at Sethanon set on the world of Midkemia. This book is a great read.
Read more
Report abuse
See all reviews